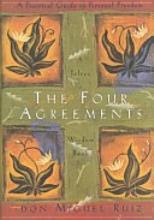 I was introduced to a book called The Four Agreements as required reading in an acting class in Los Angeles. It was an intense class where I met some fantastic and fearless actors. My life was never the same after reading Don Miguel Ruiz’ book. It is a quick read. So simple and easy to understand. The agreements are:

1. Be impeccable with your word

4. Always do your best

The format of the acting class was that we would choose something to ‘put up’ in front of the group (anywhere from 20-50 folks on a given night). It could be a monologue, a scene or a song performance. After each performance, first the teacher and then all of us in the audience gave constructive feedback. It was so intense! The class met on Wednesdays at 6pm and would run late into the night sometimes til 2 or 3 am until everybody who was prepared had a chance to perform. The thing is, is that no one left. Everyone stayed until the end. Everybody supported each other by observing whether they went first or last. The nights were magical. The energy in the room was amazing.

The performances were some of the best outward exhibits of self-realization and artistic expression I have ever witnessed. And my own performances in that room are some of the most incredible heartbeats and moments I have had in my life. The thing is, by keeping the Four Agreements, it raised the bar on the whole experience for actor and spectator.

Being impeccable with words meant we had to know our performance material inside and out. For anyone who has had experience acting, learning the lines and words of the script (or song) is the first step. This requires the foundational work of memorization. Never making assumptions meant that as we expressed the emotional content of the material to the audience by our actions and words we could not assume that because the script dictated sadness then the audience would know that. We had to skillfully convey this through words and actions and our unique artistic expression of communication. Not taking things personally meant we had to be ready and open for the feedback. The feedback was meant only to help us improve our ‘chops’ or to praise us for outstanding work. Of course if we were giving feedback we had to be impeccable with our words—it was all interrelated. And finally, we had to always do our best if we were to put something up before the group. If we hadn’t prepared sufficiently we were not to waste the precious time of our peers and that feedback was really hard to take. The stakes were high. Everybody in the room were aspiring actors and performers in Los Angeles going out on auditions daily. It is one of the most intense job markets in the world, if not THE most. But there was never any question that we all wanted each other to succeed—not just in the actor’s studio, but also out there on the street and on the screen!

In that acting class, The Four Agreements opened doors to my consciousness and my courageousness, and my soverignity-of-self like nothing I had ever experienced. It also opened up my eyes to how other people perceive my actions and words. I remember my teacher in that class saying he made the book required reading because he could not waste precious life in the midst of gossipy or complaining folk who made assumptions or were constantly taking his words personally or who were satisfied with mediocrity. I miss him and I love him still for holding the space for those life-altering nights!

When I first read the Agreements it became clear to me how loose I was with my speech and words. How my assumptions became hard and fast truths (in my mind). How much power I gave to other people’s shortcomings with their own words directed toward me. And how much more skillfully I could apply myself to all of my endeavors. I found myself in a constant state of epiphany…”Oh THAT much??!!”

In the years since, I give credit to that book for getting me one of the coolest jobs I’ve ever had (because I recommended it to the hiring person), getting me through a hard break-up, helping me through family relationship challenges, and more. I have read the book more times than I can remember. I have given away probably 20 copies of the book in the last 10 years. I continue to read the book in times of confusion and hardship because it illuminates a skillful method of participating with what arises. And I am reading it again this week. Because in the blink of an eye I find myself challenged by dis-agreements and I need for it all to get back to agreeable. This wisdom will get me there and I am so thankful for Mr. Ruiz’ impeccable words to help me through challenging times once again.

I agree to do my best with my words, to not make assumptions, or take things personally. Please join me!

One Reply to “Please Agree With Me”