Day 3
4am rise and shine. My inner clock is sill figuring out India time. Easy trip to Delhi airport and a ride on SpiceJet to Varanasi. Today is Maha Shivaratri, a Hindu festival and national holiday that celebrates the anniversary of the marriage of Shiva which is symbolic of the union of the Spirit and Relative worlds. This is YOGA!!
Varanasi is the holiest of all Hindu cities. On any ‘normal’ day, the energy here is electric. There are Indian pilgrims bathing in the river. The labyrinth of ancient alleyways are teeming with the hustle and bustle, twists and turns of the living. The Ghats – stepped terraces that line the banks of the river – are both seats of ancient ritual honoring the earth elements and cremation grounds to begin the transition to Spirit world. Mystics and religious call Varanasi a tirtha, or crossroads, where man has a portal into the realm of the gods, and where the gods descend to be among man. Here, the ‘veil of time’ is thin all the time! It is as if the Ghats are a seam between the chaotic maze of material living in the streets and the natural ease of letting the river take it to the next realm. In Varanasi, humans literally walk that line between life and death. Not in daredevil or sad ways, but as witnesses, even spectators to the ultimate reality. Some of the images are very intense and disturbing to Western Brain. But here in Varanasi the sick, dying, and dead are as much a part of the scene as the living. It’s a stark reminder that we really are all in this thing together. Varanasi is INTENSELY WONDERFUL. Not for everybody. But, as it is my second visit here, I know in my blood it is not the last.
That today is a celebration of Shiva, it is extra wild here. This is Shiva’s city! It is Mardi Gras at home. That we are all on the cusp of celebrating Spirit manifest in Culture… There are no coincidences only auspicious unions!
So many crazy incredible unplanned events happened today. A boat ride on the river bc ‘it’s the only way to get there’….a newly renovated boutique hotel in an ancient palace with th most breathtaking yoga room overlooking the river…a sweet sweet small group of fast friends. And the tangible buzz of ‘the shakti of the Universe’ which my friend Michele Baker calls the Ganges. This has been a long beautiful day and now it must end. MAHA SHIVARATRI! HAPPY MARDI GRAS!! 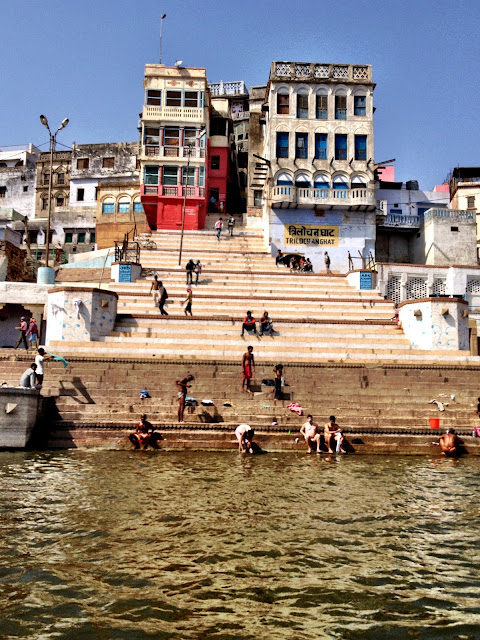