We take the heart of the mountain into our own hearts as we leave Dharamsala today. On the way out of McLeod Ganj, there is a flurry at the entrance to Dalai Lama Temple. He is on his way ‘home’. People line the street on both sides as we leave the village. A quarter way down, our cars pull over per police direction. Outside the cars we cross the street in just enough time to make way for the motorcade. In a flash the Dalai Lama passes in his car and waves to us. Giddy. Star Struck. Elated. Just plain Happy Buddha. We are SO lucky. I can’t believe it! To see His Holiness the Dalai Lama in Dharamsala is really a dream come true.
By 9pm we have arrived back in Delhi. We visit my friend Inni Singh at Delhi Music Store where the group buys 3 more harmoniums. We are a group of 8 carrying a total of 4 harmoniums. Beautiful Music!! We are totally a band. Currently we’re on a bus to a one night hotel near the New Delhi Railway Station and head to Rishikesh for the yoga festival tomorrow.
I haven’t mentioned that I have been sick with ‘Delhi belly’ since Norbulingka 5 days ago. The violent worst part only lasted for 12 hours but the last 4 days has been a strict diet of banana lassi, toast, and plain rice. My stomach can’t handle anything else. The good part is that I feel ‘cleansed’ and ready for 5 days of yoga and singing. Love & Peace to All. Om mani padme hum.
P.S. The photo of H.H. Dalai Lama was taken by William Gilbert who is traveling with our group. 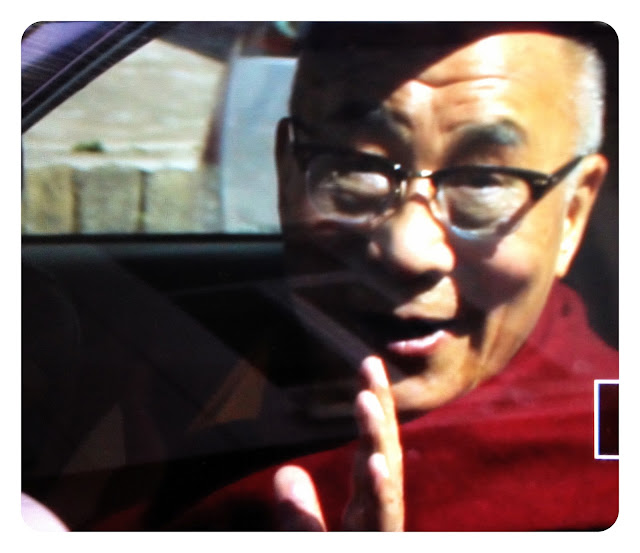